Shelley-belly’s Underground is very excited to be catering the wedding rehearsal of a couple that attended one of our very first underground dinners and we’ve spent the past few weeks playing with old recipes and inventing new ones to make their night extra special.

So this post is not going to be about their dinner, that menu has to stay secret for a another week or so, this post is about the dish that got the chop. It was my favorite of our discarded ideas – it was too gluteny for a dinner that [unexpectedly] has to be gluten-free.

A pithivier, really just a fancy word for “pie” (and also a town in France), is, traditionally, a sweet pastry filled with frangipane and fruit. I filled mine with braised duck and the last of the summer’s cherries and served them with charred carrots and a duck and cherry jus.

I won’t bore you with the recipe, let’s face it, we’re all mostly interested in pictures anyway, but if you’d like the recipe please email me and I’ll be happy to give it to you.

Once again, I got so involved in the making-of that I forgot to take photos so you’ll just have to take my word for it when I say that making the Pithiviers was time consuming and lots of fun.. if, like me, playing with pastry and filling is your idea of fun.

I’ve blogged this dish because I love it and really wanted to share it. However, I’ve now made it six or seven times and not once, seriously not once, have I remembered to take photos of it. So you’ll have to use your imaginations or have a look at Fatgirl Hedonist’s blog about her experience – there’s a photo there. I’ve no doubt I’ll be making it again soon though, so will post photos when I do.

One of my favourite food memories, one I revisit regularly, is of a wild boar and foie gras sausage at Bocca di Lupo in Soho, London.

I’m not going to set the scene, drag you with me through a recollection of slushy London streets on a rainy autumn afternoon. I’m not going to tell you I had no reservation at a restaurant that ritualistically cannot seat you without one. Build suspense about my teary conversation with the hostess and finally being given a seat at (gasp!) the best table in the house – the bar, a front row seat to watching the magic happen.

I’m not going to do any of that, I’m simply going to tell you about one perfect mouthful of food.

So it was the wild boar and foie gras sausage served on a little mountain of steaming hot farro. It was fine. Nice. Better than nice. Delicious even. But mostly it was just sausage and farro. And then one perfect forkful – the foie gras had melted. It leaked  and oozed and spilled out of the sausage and puddled onto the plate. My next, slightly disinterested mouthful (I was reading a pretty interesting book at the time) is the one I think about regularly. A small heap of nutty farro grains on the end of my fork, each one perfectly coated in the unctuous, rich, fatty foie gras. Simply the best mouthful of food ever.

And of course, I did actually try to recreate it myself. I don’t think I’ll ever manage an exact replica of that one perfect mouthful – too many stars would have to align to make it so, but this is what I did…

First I bought a tronchon of foie gras from Hudson Valley Foie Gras & Duck Products. I cut it into chunks, wrapped each one in cling film and popped them in the freezer (and promptly forgot about them). But then, when I remembered them, I did the following.

I cooked up some farro. Steaming hot, al dente, well seasoned. Then I used a microplane to grate a generous mound of foie gras into a chilled dish (if you try this, chill your dish in the freezer and immediately after grating the foie gras put the whole lot back into the freezer until you need it). When I was ready to serve I spooned the foie gras (again, generously) onto the farro and stood back and watched as the curls of foie gras unfurled and started to melt. Delicious. Almost perfect. But missing something.

I did it again. Exactly as I had done before but this time with a tablespoon of foie gras stirred through the farro before I plated it. Really, so close to perfect but still missing a little something. Balance. Texture. Sweetness.

So I did it again. Exactly as I had done before but this time with a tablespoon of foie gras stirred through it before I plated and with a teaspoon of crushed peanut brittle – salty, sweet, bitter peanut brittle – sprinkled on top.

In the interest of full disclosure I should tell you that none of these ideas are exactly mine – I’ve already come clean about the farro/foie gras pairing being a Bocca di Lupo creation. The grated foie gras is something David Chang does at Momofuku Ko and his dish also features a brittle, though at Ko they use pine nut not peanut and I suspect it is somewhat less bitter than mine. I let the caramel go a little further than I normally would with a brittle because I thought the bitterness would add an additional flavour layer to the dish. I was very happy with the result. I think my guests were too.

(Sorry! There’s no pun worse than a lazy pun but that was just too easy to pass up.) 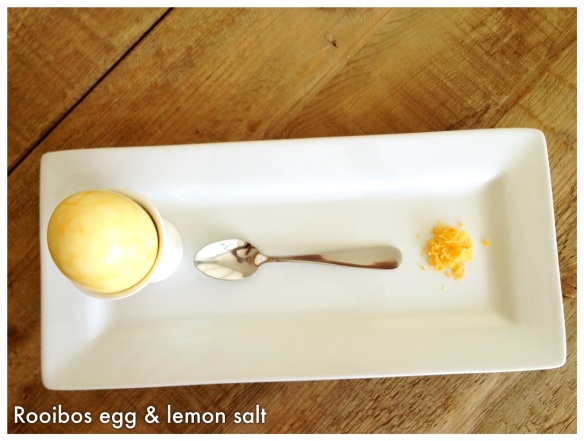 Prep for our next underground dinner – April 27, Downtown Miami – is well underway and we’ve been having a play with some fun new dishes. The menu is, as always, a closely guarded secret but I thought I’d give you a hint and share a little of today’s experiments. The final product will be a riff on one of these – I’ll post pictures of the finished dish in the week after the dinner.

I love eggs as a starter and almost always have at least one course that highlights just how perfect they are. Perfect if left to shine on their own and perfect if fiddled with just a little.

Aesthetically, the lavender was the least successful – I had hoped it would have prominent purple or blue veins but it turned out more of a pale puke-green. Not great to look at and probably not great to serve as a first course to people that have never eaten in my home. But it tasted amazing. Seriously. I don’t generally like lavender as a food flavor, I feel it’s more of a soap or potpourri ingredient but I decided to give it a go and I loved it. I paired it with charcoal salt from FalkSalt, in part because I had a mental picture of a blue veined egg on a board complimented by a pile of soot-black salt (failed there!) and in part because I thought the mineral notes in the salt would pair well with the floral lavender. I’m working on the aesthetics, better pictures to follow if I get it right – in the meantime, this is what I’ve got so far.

The second pairing was a rooibos tea egg with lemon salt from The Meadow in NYC . A great flavor combination. And so pretty. Overall a success, I thought. I won’t change a thing.

Last was the black tea – not just any black tea, Fortnum & Mason’s Royal Blend, the queen of teas. Actually, I didn’t really think that through. Any black tea would probably work so basically I just wasted some really good tea leaves trying to make a hen’s egg taste like tea. It was by far the prettiest and paired really well with Maldon’s smoked sea salt flakes. Also, the Maldon salt has the nicest texture of the three I used – if we decide to go with the rooibos and lemon for next week’s dinner I’ll probably make my own lemon infused salt using regular Maldon salt.